The Posidonia Seagrass Meadows of Ibiza 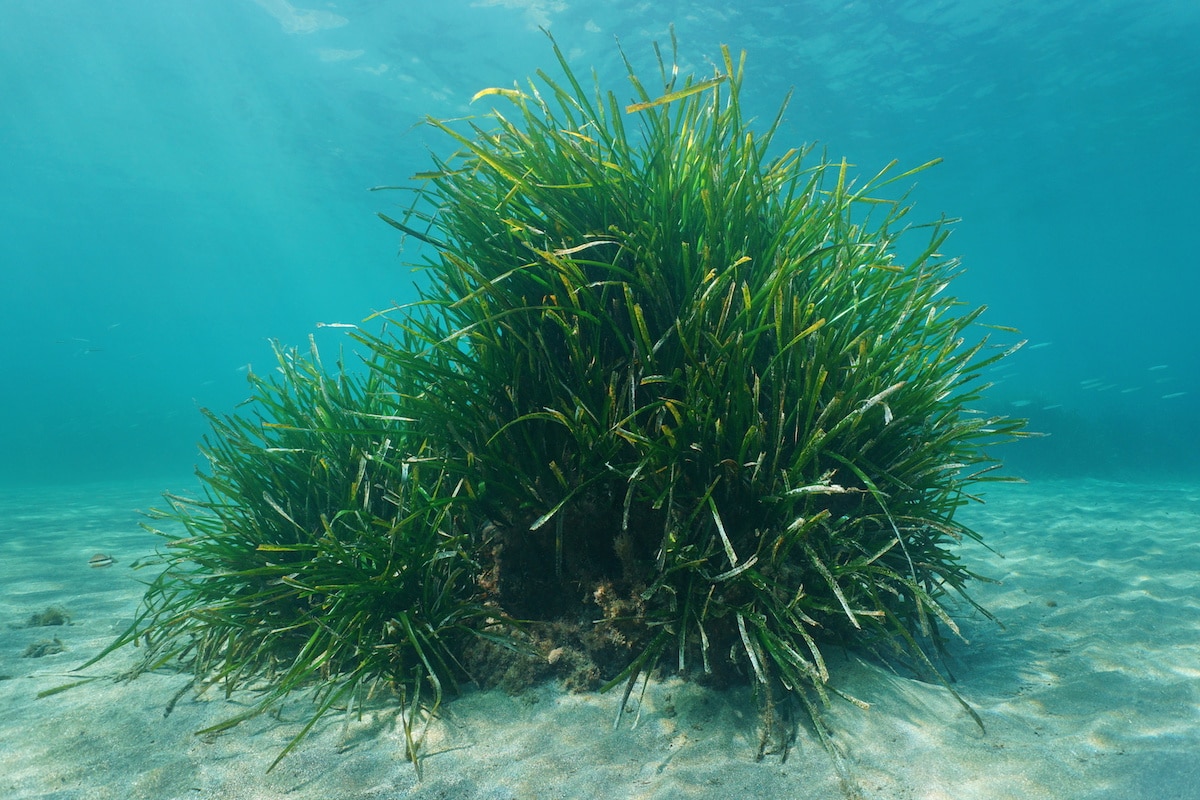 Underwater meadows of Posidonia seagrass give Ibiza’s sea its spectacular turquoise colour. This aquatic plant is protected because it supports incredible biodiversity. Posidonia is also the substrate for the oldest living animal on earth.

Ibiza and Formentera are like two perfect jewels, immaculately set in the centre of the Mediterranean sea. Both islands have stunningly clear blue waters and dazzling white beaches.

Ibiza is crowned with an emerald forested coastline, while smaller Formentera has a flat terrain, which rises steeply to the south at Cap de Barbaria, to become a staggering headland, towering high above the azure ocean.

A long meadow, formed from seagrass, has stretched between the islands of Ibiza and Formentera since ancient times. It’s been silently flourishing for over 100 thousand years.

This massive seagrass meadow is the source of Ibiza’s crystalline seawater. However, in the last 50 years, due to over-construction on the shoreline, pollution, climate change, oil drilling and pipeline laying, and not least the dropping of anchors, the Posidonia’s precious ecosystem is challenged.

Due to her beauty, Ibiza is one of the worlds most popular islands to cruise by sailboat. Hundreds of private, charter and super yachts cruise the coast during the summer, stopping along the way to anchor in the numerous protected coves.

Many charming towns and villages dot the undulating shoreline of the islands. One may dine on traditional Spanish cuisine and sumptuous seafood. Or chill out in beachside bars and chiringuitos with a tapas or an icy cocktail. Maybe explore historical sites dating back to the 7th Century BC? Or perhaps dance the night away to the pumping beats of the hip electronic music Ibiza is famous for.

As a result of all the delights the islands have on offer, the numerous bays and beaches are often super crowded with flotillas of yachts during the Summer season.

This situation can get to the point of where finding a place to drop anchor is not only difficult, but sometimes impossible.

It is highly prohibited to drop anything heavy, such as a yacht’s anchor, on Posidonia beds.This is because of the plant’s highly protected status on Ibiza and Formentera. It’s also important to watch out that your anchor chain doesn’t drag along the seagrass beds.

Furthermore, the bottom is often very rocky where it’s not covered with seagrass. I’ve seen many a yacht lose it’s anchor, especially at Benirras Beach, due to hooking on the rocks.

Another tricky place to anchor is the little isle of Tagomago, where recently I had the pleasure of an inspector observing me struggle to anchor in between dense patches of seagrass and rocks.

So be aware that inspectors do regularly come round on dinghies and actually check out your anchor underwater with their equipment. You’ll face an enormous fine if you are caught with your yacht attached to a grassy underwater bed. The first rule of sailing in Ibiza is – stay away from the seagrass!

Where is Posidonia found in Ibiza?

The long meadows of seagrass stretch for 8 kilometres underwater from the southern tip of Ibiza at Ses Salinas Beach to Es Freus in Formentera. The entire area has been declared a UNESCO World Heritage site. Ses Salinas is a nature park and so is Es Freus. However, the entire island has seagrass patches growing in its bays and beaches. You will need to be on constant lookout for it when you’re planning to anchor.

When you are sailing around Ibiza, find out the 5 Top Spots to Anchor and be clear of the posidonia seagrass.

Despite the rules and regulations to protect Neptune grass, very few people know much about this special plant and the amazing things it’s responsible for.

1. A Mysterious Animal is Living with Seagrass

As I’ve mentioned, Posidonia, commonly known as Neptune grass, plays an important part in maintaining the seawater’s crystal clarity. This is due to its special relationship with a intricate coral-like animal that grows on it, which filters the seawater.

‘Bryozoa’ refers to a genus of almost microscopic marine animals. There are a huge variety of different forms. ‘Electra Posidonia’ is the Bryozoa that most commonly lives on Neptune grass. Click here to see a photo of this filamentous creature.

“Bryozoa’, meaning ‘Moss Animal’ turns out to be the unusual hero of my Ibiza seagrass story. Similar to the coral of the Great Barrier Reef in Australia, the moss animal is a clone of itself and lives together with itself all linked together in a big clone family on a base substrate. It’s considered one of the oldest living animals, as it has been around for over 500,000 years.

In this case, Mediterranean Bryozoa live and grow their networks on the surface of the long flat green leaves of Neptune grass. They can either look like white lace or like pale round gelatinous blobs.

These exotic creatures feed from the waters surrounding them. They capture tiny sea particles and filter them through their shell or sponge-like exoskeletons.

Ultimately, this prehistoric system keeps the waters of Ibiza and Formentera clean and pristine. Furthermore, not only can this animal hunt effectively, but a Bryozoa colony unit even has a teeny brain, situated between tummy and bum.

Importantly, this unusual animal has the option of breeding asexually as well as sexually. The twin results are:

1. (According to Encyclopedia Brittanica) The plant is technically immortal because it is always giving off asexual little clones. It may theoretically never die unless there is some sort of massive catastrophe that wipes out a species or a genus.

2. Sexual reproduction means that it is also incredibly diverse and adaptable. This is the reason there are so many types of Bryozoa – but not all of them will enjoy living on seagrass.

This exclusive partnership between the Posidonia seagrass and the Bryozoa is the very crux that maintains this delicately beautiful ecosystem. Its a symbiotic relationship had been going on for hundreds of thousands of years. However, today the Posidonia oceanic is threatened in multiple ways, which means the mysterious Bryozoa animal is threatened too.

Posidonia Seagrass also plays a major role in the formation of beaches. Without this submarine plant, beautiful sandy beaches would simply not exist on Ibiza and Formentera. There are two ways in which this happens:

1. Posidonia forms light egg-shaped bundles of grass fibres, called ‘berms’, which escape from the meadows and wash up against shore. These fibrous clusters help to form beaches by shoring up the sand. In areas where the seagrass has been destroyed, we observe beaches eroding away fairly rapidly. – such as that beach on Formentera (image) .

2. When sand drifts down to the ocean bottom, it falls between the thick clusters of posidonia seagrass and gradually accumulates. This cause sandbanks to form. They protect the beaches from waves, especially during storms, that might wash it away.

The sandbanks also permit diverse marine life to thrive and grow in the Neptune grass ecosystem, where it’s sheltered from waves and currents.

Today, Ibiza and Formentera are facing rapid beach erosion This is largely due to construction along the beaches and to the loss of seagrass, caused by anchors, dredging and underwater drilling.

Construction along the shoreline basically cuts off the sand supply to the sea. When sandbanks can’t form, waves will destroy the seagrass ecosystem. Construction also means that sand dunes, which keep the beach shored up and replace lost sand, cannot carry out their role. Without them, the beach has no way to recover.

The meadows not only purify the seawater, but also create essential nutrients that sustains life in other parts of the Mediterranean sea. This means that the meadows are like farms, producing food for the sea.

Neptune grass itself sustains an astounding variety of marine life. Over 400 plant species and over 1000 animal species dwell in this unique ecosystem. Amongst them are seahorses, turtles and flamboyant nudibranchs.

The seahorses of Ibiza and Formentera are highly endangered. Hippocampus hippocampus and Hippocampus guttulatus are both included on the Red List of Threatened Species of the IUCN and the Balearic Government’s Llista Vermella dels Peixos de les Balears.

A Posidonia Seagrass meadow is actually a massive carbon sink. Posidonia is a flowering plant that learned to live underwater. It plant absorbs carbon from the atmosphere and gives off oxygen which supports marine life.

The Save the Posidonia Project – the island of Formentera has launched a campaign to Save the Posidonia. Many business, hotels and private individuals have contributed to the cause and continue to do so. However their presence is the very source of Posidonia’s demise. It may be interesting to note that the massive ferries that run continuously to and fro have contributed surprisingly little towards this initiative.

The Posidonia Seagrass Project lists the causes of damage to seagrass:

1. Mooring of ships and yachts causing damage by anchor and chain
2. Marine pollution especially sewerage from the land
3. Bilge water from boats (oil, hydrocarbons etc>)
4. Extraction of sand and dredging in harbours, ports, piers and jetties
5. Presence of invasive species (Caulerpa taxifolia)
6. Bad fishing practices where the seabed is damaged
7. Climate change causes a temperature rise which is killing the seagrass.